Story Behind The Kids Names 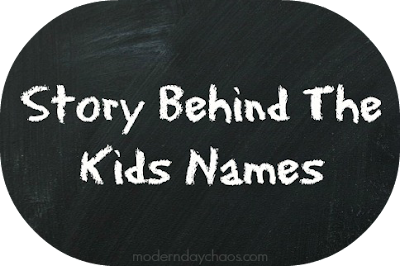 Why/how we chose our little ones names.

Vienna Ruby
It took a while for us to find a name that we both liked. But one day it seemed to click when we were listening to a song -  "Vienna" by Billy Joel. Both of us really liked the song and hadn't heard the name Vienna before. We weren't looking for something super unique, but definitely something that not a lot of other kids had. So this name fit perfect. Also, I really liked the first line of the song "Slow down you crazy child" - made me think of how fast babies/kids grow up.

We knew what her middle name was going to be the second we found out she was a girl, Ruby. This is because Greg and I met at Ruby Tuesdays when we were both working there. It was a perfect, meaningful middle name.

She has tons of nickname options. We call her V, Vivi, Nen, or Nenna.

Hadley Coe
We chose the name Hadley much earlier than our other two kids, about midway through the pregnancy. It was a name that I had on my list since Vienna was about one. We found out we were having another little girl about 2 weeks before Vienna was diagnosed, Vienna was excited to have a little sister and insisted her name be "Flower". After a little nudge she agreed on Hadley. I heard the name a while back on True Blood and just always liked it. It really fits her now.

Her middle name is probably not one you hear often. We chose it because I was having a home birth and it was the name of the street in which she was going to be born on. After we all agreed on her full name, we ended up moving to a different home 1 week before she was born (it was a CRAZY week). The new street name didn't flow at all so we still went Coe. I love how her name flows together.

For nicknames, we usually call her Had or Haddie.

Sawyer Flynn
I've never had a boy name that I was in love with or even any that I had on a list. Since we found out very early at 11 weeks that we were having a boy, I knew I had a lot of time to figure out a name. But this pregnancy went by super fast and before I knew it I had a no-name baby boy in my arms! On the name list we had Holden, Jack, Levi, and Sawyer. We were looking for a classic name. I thought that when I saw him I would just "know" but we didn't. It wasn't until about 3 hours later that we decided he was a Sawyer and we're both happy we made that decision.

We knew his middle name would be Flynn because it was meaningful to us. Our children's pediatrician is Dr. Flynn and she has been through it all with us. She is the one who first spoke the word "Leukemia" to us and she was always there visiting Vienna in the hospital.

We're still working out a good nickname for this little guy. Right now we call him Soy and little soybean, not too great but i'm sure we'll come up with some more.


As for future little ones? Well, not sure there will be any ;)