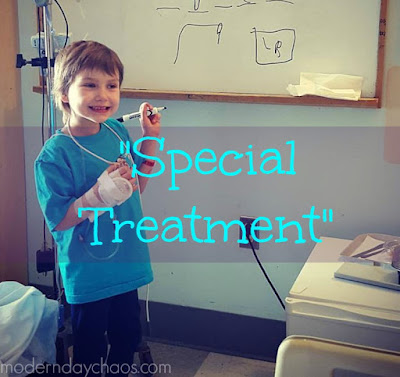 Due to a recent issue that we have encountered, I have thought quite a bit about the words "special treatment" and if they apply to our situation. I've never thought of myself as a "helicopter mom" or a mom who would ask anyone to go out of their way/break the rules for my child. But - with each experience we encounter in our lives, our outlook on things can change. I am one who follows the rules - always. Ask my husband, he'll say the same. If I see a sign that says don't do something, I don't do it. I am afraid of consequences. When I try to call and clear up a situation and they tell me "No", I hang up and try to let it go. But in this recent situation - their rules were just not right. So I had to bring in my husband to help clear it up.

Situation - For April school vacation we signed her up for an extra special experience, a daily M-F zoo camp. We usually don't like to commit to anything because there is always that possibility she get sick, but she's off treatment and had been doing so well. It wasn't cheap but we made it work. She was SO excited. The Thursday before school vacation I got a call from the school nurse who said she wasn't feeling well and had a low grade 100 degree fever. I picked her up at lunch time and took her home to rest. By the next day (Friday) her temp was up to 103.8 and she had vomiting as well. We took her to her Pediatrician and she had a viral infection, we were sent home to rest and encourage fluids. The high temp stayed through Sunday and a cough came as well. By Sunday night she hadn't used the bathroom at all and her cough was really bad. I decided it was time to go to the ER to get her checked out. I figured we would go in, get some fluids and go home. She could still feel better the next day for zoo camp. When we got to the ER they did a chest x-ray to rule out Pneumonia, but it confirmed Pneumonia. Her oxygen saturations were hovering around 90% (dipping as low as 84) and they did not feel comfortable with us leaving. We stayed for two nights and she received many doses on antibiotics and fluids. On Tuesday zoo camp called to see why she hadn't been there, I told them the situation (tearing up when I told them how excited she had been). I asked if we could possibly switch the week for a week in the summer so she could still experience it. I was told they had strict rules but she would run it by the director. I got a phone call back about 20 minutes later and she said sorry, they weren't able to refund the money or switch the week. I was very upset and rules are rules I guess. I then called my husband and explained what had happened (he was at home with our other two children), he was NOT happy with the answer. He called back and left several messages. He finally reached the director who, at first, was not much help. She insisted they cannot bend the rules, even for these circumstances. Not until he mentioned what the news would think about this did she change her attitude. In the end, we did get the week switched to a week in the summer - but it was only because they didn't want us to reach out to the news or put any attention on them, not because they had a change of heart.

Our situation with our child is unique. We have a child who has faced death, before even knowing what it was. She has made friends at her cancer clinic and then lost them due to the horrible disease.  She has had years of her innocent childhood stolen from her. Those years were so important to her development, socially and emotionally she is not where she should be. She never got to experience the first day of Kindergarten or her first Father/Daughter dance (which she cried for days about). After all that we have gone through as a family, we realized that every day is important because the next day could change everything.

I'll just say it - children who have fought or are fighting cancer should get special treatment. Everything possible should be done to ensure that they are experiencing life and making memories. As much as we wanted her to live a normal life, it's just not possible. She has been through too many traumatizing events. Even though she is no longer sick and her hair is growing back, the pain of all that has happened stays. Tomorrow we could hear the word "relapse" and that is why today is so important. 15-20% of children who have been treated for A.L.L. will relapse, that's a big number! I don't want to live everyday scared of her relapsing, but it is a possibility. That's why it is crucial she get to experience everything possible. There's a thing called "pulling the cancer card". When she was in the midst of treatment she was completely bald - you could tell she had cancer. We never really had to ask for special treatment, people would just do it because they felt bad. Once they start to look more "normal" no one has any idea what they've gone through. So sometimes you try to "pull the cancer card" so that way she can experience something extra special. I'm officially not ashamed to say that on rare occasions, we do it. And if it gets her to give us an extra big smile, then it was TOTALLY worth it.