So, here we are. We are now living in our very own "post cancer" world. This is supposed to be the time we're diving back into what you call normal. For the first time in two and a half years, we started a year out with no chemotherapy treatments and no steroids. A fresh start, you could say. It's not quite what we expected. Not the POOF back to normal I had anticipated. This is going to take time, potentially.. a lot of time. Or, maybe this is our normal. Whatever this is, we're getting used to it and learning to make our current life work for us.

Before cancer, it was just us three. Until late 2013 it was just me, Michelle, a new nurse who had just taken her first job in an OB/GYN office, Greg, who was then almost a year into his new position as an Executive Chef and putting in a lot of hours for this demanding position and of course, Vienna. Vienna was our lively, energetic, then 4 year old. In the summer of 2013, we had decided that since we were all settled in with our new jobs and home, we would finally add to our family. Vienna had been asking us for a baby sister for a while. We found out we were expecting just a few short weeks before she started becoming sick. 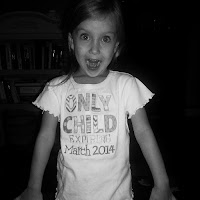 Yes, you could say we was pretty excited when we told her the news. Late summer she started getting more and more sick. She was having frequent ear infections and was also diagnosed with Pneumonia in August. I vividly remember when she was diagnosed with Pneumonia. I picked her up from preschool, where I found she had a fever of 103. Took her immediately to the urgent care. The next day I remember crying at work, wondering why my baby was getting sick so often. Up until then, she had been very healthy and rarely got sick. We took her to the pediatrician and got her fixed up like you would any other child. Antibiotics were prescribed, but only seemed to provide relief for a week or two - then the infection would come back. This was strange - but so we went on with life. Until we noticed an increased amount of bruising on her body. This is one area on her that concerned us most.

At her next visit to the pediatrician in September, for yet another ear infection, we mentioned the bruising. We all chalked it up to her being an active 4 year old in preschool. And so we went on. At this point, Greg was using Dr Google and inputing her symptoms. Basically what came up was cancer (leukemia specifically) and viral infections. He was set on it being the worst, I was more optimistic that it was something more like an infection. I was probably more in denial, though. Everyone thinks this could never happen to them, their family, or their child. The point where I became really concerned was Columbus day weekend. She developed petichiae. It showed up behind her ear. I now knew that whatever was going on, was probably progressing. Of course because it was a holiday weekend, her pediatrician was closed that Monday (October 14th). We anxiously awaited for Tuesday to call. But things began to progress more. By Tuesday she developed a fever and fatigue. We called first thing and waited for a call back. We received a call back late afternoon on Tuesday saying her doctor wanted to see her the following day. Until then, we would keep up with the Motrin/Tylenol regimen for the fever. Still sort of in denial, I went to work as usual that Wednesday and Greg took her to the appointment. Here she is on the morning of that day. 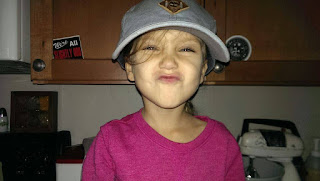 I waited for the phone call on how it went. My phone rang around noon, I dropped what I was doing to answer. Greg told me to leave, leave work now. I asked why, but I knew. Something wasn't right. All he could say was that the pediatrician said it was bad, not good. They had already been for stat blood work and were heading home to wait. I left immediately to meet him. We both met at home where we waited for the phone call. I called my mom, who was in Mexico at the time, she didn't answer. Then I called both my sisters. I didn't exactly have news to tell them, just that something was going on with Vienna and it wasn't good. Around 4pm the phone rang. I was so nervous that I hit the end button instead of the answer button! We quickly called back, but it was just the secretary that answered to tell us that her doctor wanted us to come back immediately.. she wanted to check out one more thing. Greg said we should pack some bags, this is obviously not a good thing. I insisted no, nothing is wrong, nothing could possible be wrong. Nothing is wrong with my child. We arrived at the office. The lights were dim, only a few people working as they are closed on Wednesdays and only open for sick visits. We were taken into a room. Thinking back now, everyone in that office probably knew the bad news before we did. She came in almost immediately. She could barely say the words. But managed to get them out. "It's not good" she said, "It looks like Leukemia, it's not confirmed, but Hasbro Children's Hospital is notified and you need to go there now, they are waiting for you in the ER". WHAT. Her Hemoglobin came back at 6 and her Platelets came back at 6,000. This explains the fatigue and petichiae.

So off we went. Mostly silent on the drive, in shock. What was to come next? I didn't even really believe the ER would know her name when we got there. But they did. And they had a room waiting. And a team of doctors to talk to us. This was real. It was actually happening. To my child. Official diagnosis of Pre B-Cell Acute Lymphoblastic Leukemia came a few days later.